Helping Spencer, peanut butter, himself, music, fame, girls, and hanging out Spencer and his friends

Baruch Cohen, better known as Billy Joe Cobra, is the supporting protagonist of the series. Prior to the series, Billy was a sensational pop star, who still seems to be prominent even after his demise. In the series, he is a ghost, only visible to those who wear a personal item of his. His cause of death has not been disclosed.

He is the distant cousin of Jane Wright leading to how the Wright family inherited his mansion. Although it is still invalidate but works with how relation system works, it is possible that Billy is Spencer and Jessica's cousin quite a few times removed and is valid that he is a distant relative to them moreover.

Billy Joe Cobra is an out-of-this-world pop star. While his fanbase may seem over-publicized and his music overrated, he definitely has the musical talent to back it up. As a pop star, he is talented in the vocal fields of singing and beatboxing, as well as capable of playing the guitar, the keytar, piano, and various other instruments as seen in the episode "Billy, Billy, Billy, Billy, Billy". He also appears to be a talented disc jockey and has been seen with mixtapes. He also appears to have went through a stint in acting, having starred in the movies Going Ape and Surfin' Brofari.

Spencer Wright, a professional-grade skeptic, greatly respects Billy's singing. Jonah Tyler Taylor, a modern pop star based on Justin Bieber, is a major fan of his as well, and says he's always been inspired by whom he calls the "greatest pop star of all time". (Billy, naturally, was very touched by the sentiment.)

Of course, not everybody loves the Cobra. Principal Ponzi calls him a joke, as well as uncreative, in "Cuckoo's Nest". A tourist in "Billy Joe Cobra Museum" called him a "hack that only knew two chords", in which Billy retorts that he actually knows three.

The cause of his death is unknown, and there are numerous fan theories about it. One of them states that he died from electrocution after he plugged his guitar into the wrong amplifier, as shown in one of his flashbacks in "Billy Joe the Scholar". Another possibility is that he was a victim of a drive-by shooting, as evidenced by the bullet holes in his tour bus that can be seen in many episodes.

Billy Joe is pretty well up on the hottie-scales and the popularity charts, and he knows it -- to the point of blatant narcissism. This, along with his other achievements, gives him a huge ego, good for the stroking. However, he can usually put his self-absorption aside if his bro is in danger or needs help. He also seems to be an understanding individual, being able to put personal grievances aside for important situations, such as an event where Spencer wanted to impress a girl. (Still, Billy doesn't seem to understand the concept of "tact".)

He isn't particularly street smart, since all his life people have been doing things in his stead and kissing up to him. As a result, he hasn't had much experience living as an ordinary person. He's also gullible, evidenced by his being fooled by Sam Hoover's disguises and getting hoodwinked into doing Spencer's homework for him. In addition, Billy is incredibly easily distracted and has a short attention span that only serves to get him and his homebods in trouble.

Despite this, he is shown to be relatively intelligent, and has surprisingly good memory. He knows some school material incredibly well because he has personal experience with the subjects covered, and completely understands Beverly Beverly celeb scene's unusual and convoluted social rules.

Billy is incredibly prone to throwing diva tantrums. He doesn't seem to regret them afterwards, suggesting that he is used to them and constantly had them while he was alive. This has caused several movie directors to despise him.

He seems to crave attention from Spencer (or just attention in general) and has a want to appease him. When scared, Billy clings to Spencer like a lifeline. Only Spencer can talk him into doing things like letting crazed tourists into his mansion or hanging out with a geeky, "unchill" ghost. In addition, Billy is always willing to make it up to Spencer whenever he wrongs him.

Interestingly, Billy doesn't seem to care much for anyone else. He accepts Rajeev and Shanilla (showing more respect for the latter) and enjoys hanging out with them, but he clearly prefers bro time with Spencer. In addition, Billy has no qualms with talking badly about people behind their back, or throwing Rajeev out of his house when Spencer decides to spend some time with just him. He also seems to think that Spencer can "do better", regarding things like bringing Rajeev as his guest to an award show.

In "Three's A Crowd", Rajeev was so easily close to Billy due to many favorable interests (favorite TV shows, jean shopping, salsa, etc.), but was hurting Spencer's relationship with Billy. The ghost failed to notice Spencer's jealous streak and attempts to separate them, showing his more oblivious side.

However, when all is said and done, Billy is a good friend to have. He'll do anything for his bro, and he's there, through thick and thin, for those he truly considers his friends.

Purportedly, many of his pop hits were about "girls, sunshine, big yachts, and money". However, nearly all of the songs we've seen were about Billy's narcissism.

Some songs have never been heard before but have been mentioned on the show:

Billy's fans are a force to be reckoned with. They, along with a few other things, annually gather on the 21st of an unspecified month in front of the Cobra Mansion to pay tribute to the anniversary of his first hit single, Loving You Is Easy. This continues even after his death.

Click here to view the abilities of Billy Joe Cobra. 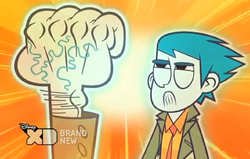