Billy Joe the Scholar
Billy Joe Cobra Museum is the second episode of Dude, That's My Ghost!  It aired for the first time on February 2, 2013, along with Scaring Mallory.

Spencer turns the Cobra Mansion into a museum in order to raise money. Problems arise when Billy is irritated by the tourists and Spencer decides to start making them pay up instead of making them stop annoying Billy.

Spencer Wright is browsing the internet back at the Cobra Mansion, looking at various relics from various horror movies. Billy Joe Cobra shows up, along with a wax sculpture of himself. As Billy fawns over himself, Spencer announces that he wants to buy the windshield from a movie called Zombie Cab 2. However, Spencer is distressed because he doesn't have enough money to buy it. This is remedied when Billy gives him the idea of turning the Cobra Mansion into a Billy Joe Cobra museum while Hugh and Jane Wright are away. Billy initially doesn't go for it, wanting to spend the money on a reconstruction of his sculpture instead, but Spencer convinces him it means his house will be filled with awestruck fans.

A short while later, Spencer and Jessica tell their parents goodbye as they are leaving to go to an accounting convention. When they are out of sight, Spencer bribes Jessica to go stay in her room with a bunch of kung fu masters' outtakes. Meanwhile, Sam Hoover is up to his old tricks again. Spying on Spencer through a sort of periscope from his vehicle, he is nagged by Madame X to go put Billy's underwear on and capture Billy's ghost. Madame X exasperatedly remarks that "it never gets any easier to see [Sam putting on Billy's underwear] again".

Soon, Spencer has managed to gather a huge crowd for the grand opening of the Billy Joe Cobra museum. Spencer and Billy let in the first group of tourists, reassure the crowd that there will be more tours, and start showing the tourists around. However, Jessica attacks one of the tourists while they are making fun of an overweight Billy, thinking that there are intruders in the house. Spencer explains to her that he is running a museum. Seeing an opportunity, Jessica blackmails him into making her the security guard with a 50-50 payout. She quickly proves her trustworthiness by getting bribed to let go of the tourist she has attacked, and giving Spencer half of her new earnings.

Sam Hoover shows up at the museum, cutting in line under the guise of a pizza delivery boy. He sees Billy Joe and prepares to capture him, but he is found by a diligent Jessica before he can even get close. Jessica demands to see a ticket, but seeing as he snuck in, he has no ticket. An amused Jessica smiles and beats him up, literally kicking him out of the museum. Sam groans in defeat, his face having slammed into the pizza he was carrying.

Meanwhile, back at the tour, Spencer is showing the tourists around. They begin to show signs of trouble. The same tourist who was earlier attacked by Jessica picks up one of Billy's guitars and makes fun of Billy, calling him "a hack who only knows two chords". An indignant Billy (who actually knows three chords) complains. Selfishly, Spencer seizes an opportunity to earn more cash by accepting bribes instead of putting a stop to the tourist's behavior. Billy is upset by Spencer's actions, but, Spencer manages to manipulate Billy into letting the tourists stay by insisting that he must pull through for his fans.

Next, Spencer shows the tourists Billy's limo. More trouble occurs when a baby is shown chewing on the car. Spencer removes the baby only to witness a female tourist trying to remove Billy's limo's hood ornament. Once again, instead of telling her off, he takes a bribe so that she can keep trying to remove the ornament. Billy is infuriated, but Spencer reminds him about the fans and he is forced to keep his anger in.

Hoover, this time dressed as a cleaning lady, turns up at the museum again. He is thwarted yet again by Jessica, who is hanging on top of a hanging pendant lamp. Excitedly, Jessica pummels him and kicks him out, leaving him stuck in his cleaning lady's cart with a feather duster in his mouth.

At the Freaky Tiki Room, Spencer is still conducting his tour, alongside an annoyed Billy. This time, the BJC-hating tourist gets into a fight with the ornament-stealing female tourist. When asked why he went on the tour, the BJC hater insists that he needed to go to the bathroom and the gas station was closed. Billy is angered by this, even more so after Spencer takes yet another bribe to let them keep arguing. In addition, a teething baby almost manages to suck up Wax Billy. Billy, who cannot take any more tourist shenanigans, takes Spencer outside of the room and calls him out on his use of bribes, foaming at the mouth with anger. However, Spencer plays the "do it for the fans" card and leaves him outside. Billy is reassured until he overhears Spencer offering to take even more bribes and gets angrier than he was before.

In retaliation, Billy takes a bunch of mini tiki statues and waves them in front of the tourists, causing them to find the museum haunted and run away in fear. Hoover-in-a-lobster-suit enters the museum (having told the waiting crowd to "make it snappy" when he was arriving), but is trampled by the stampede of tourists and promptly confronted by the waiting Jessica. After being kicked outside for the third time, he finally gives up.

Spencer witnesses the loss of his visitors with pure horror. He confronts Billy and learns that Billy is scaring the tourists off on purpose (he discovers this while being called a "former friend" by Billy).

After Billy's declaration of "winning 1-0", Spencer turns the BJC museum into the BJC haunted museum. Billy becomes beyond annoyed with Spencer and starts giving him a taste of his own medicine, intentionally manhandling his possessions and taunting him about it. When Spencer gets upset and tackles Billy, he accidentally smashes Wax Billy into little tiny pieces. Spencer realizes that he messed up and should apologize, but Billy cries, makes a (fault) line in the floor of Spencer's room, and insists that Spencer has "crossed a line". Billy disappears down the fault, leaving Spencer to think about what he did.

Hoover is shown apologizing over the phone to Madame X. He tells her that "the security was airtight" and had no way to capture Billy. Conveniently, during this call, Billy walks out, luggage in tow, prepared to leave his mansion. Hoover instantly whips out his Ghost Containment Unit and captures Billy. Spencer comes out and sees him running off with GCU'd-Billy and starts running after him, demanding he give Billy back. Hoover doesn't comply, so Spencer calls security (Jessica) and watches her pummel him for the fourth time. Billy is let free and deflates like a balloon inside his containment sac, finally landing flat on his face in front of Spencer.

Later, Billy is having a memorial for Wax Billy, playing the keyboard mournfully and lighting many candles around a framed photo of Wax Billy. Spencer reveals that instead of buying his beloved Zombie Cab windshield, he bought another wax statue for Billy. He then apologizes for his selfish behavior. Billy is overjoyed and immediately forgives Spencer, only to accidentally destroy his statue in the process of celebration. After seeing Wax Billy's second accidental destruction, Spencer suggests a opening Cobra theme park next weekend to buy a new statue, to which Billy wholeheartedly agrees. 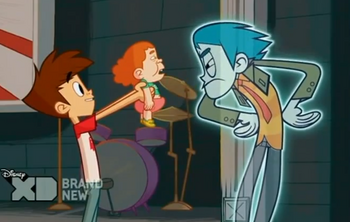