Copying people, making friends, copying his friends, getting vengeance on said copied friends when they get annoyed with him

Bobby is an obsessive, geeky ghost whose only appearance involved harassing Billy Joe Cobra. He was later caught by Sam Hoover, who mistook him for Billy Joe due him changing his appearance. He was last seen latching himself onto Hoover the same way he latched himself onto Billy.

Bobby initially comes across as a nice guy. He is very eager to please and is very insistent on spending time with new people. Spencer assumes that he is harmless when he first meets him, and even the unnerved Billy sees him as little more than a nuisance.

However, when people talk badly about him behind his back, Bobby becomes vengeful and frightening. This is shown in Copycat Cobra, when he uses Billy's knowledge against him and locks him into a freezer, then later demands that Spencer Wright replace Billy with himself.

He isn't very good at being "chill." Instead of treating Billy like a person, he flew around obsessing over him; in fact, Billy Joe even took the time to point out that he needs to calm down. However, his only response was stating that he didn't know how to, prompting Billy to teach him "the art of being chill". Later, he really wasn't good at being chill after having his evil plan thwarted by Billy, despite all of Billy's teaching.

Bobby is also a very good learner. When he first met Billy, he knew that in order for Spencer to see him, he had to give him his retainer. By the time he became evil, he was capable of making himself visible to anyone who doesn't have his gear and producing "ecto-bombs", something which Billy couldn't do despite being being as ghostly as him. His vast knowledge of ghosts could be a result of him being a ghost for a very long time, perhaps even longer than Billy.

Bobby makes for a very formidable opponent, despite his geeky and weak appearance. Only Hoover's capturing him made him harmless; otherwise, he would've likely obliterated Billy.

Bobby seems to legitimately be a Billy Joe Cobra fan. At first, he is overly enthusiastic about meeting Billy and is incapable of "chilling" around him. Much of his time is spent trying to please Billy and get him to hang out with him. Bobby is visibly happy around him.

After he overhears Billy talking about him, Bobby starts to hate Billy. And after he gets revenge by trapping Billy in a freezer, he tries to replace Billy as Spencer's friend (showing that he actually covets Billy's lifestyle postmortem). He later tries to destroy Billy with ecto-bombs and other ghostly weapons, but Hoover stops him before he can.

Bobby apparently takes well to Spencer. Since Spencer tries to have Billy hang out with Bobby throughout the episode, he likes Spencer and has no quarrel with him. Later, after he turned vengeful, Bobby tries to become Billy's replacement, (presumably because he either wants to have a friend like Spencer, or wants to rub his revenge in Billy's face).

Bobby isn't shown interacting with Hoover much. However, towards the end of the episode, Bobby states that he wants to become "just like [Hoover]", suggesting that he's going to latch onto Hoover the same way he latched onto Billy.

So far, Bobby has been shown/been able to: 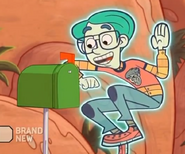 "I saw you on Ghostbook." 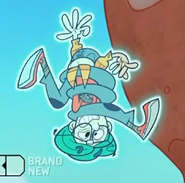 He's just all twisted up inside about accomplishing one of his lifelong dreams.

He was literally so happy he could explode. 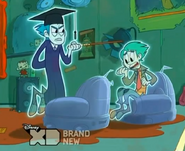 Learning the art of being chill from the Grand Master of Chill himself.

Bobby as a participant in a tale of two Cobras. 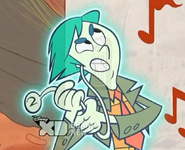 Preparing to listen in on Billy's and Spencer's conversation.

You just know he's a big bad villain when he spins around in a chair, cradling a prized possession.