Dude, That's My Ghost! Wiki
Register
Don't have an account?
Sign In
Advertisement
in: Side Character, Character, Girls

Teresa Gallagher
Jessica Wright is Spencer Wright's sister, as well as Hugh and Jane Wright's daughter. Despite being the little sister, she terrifies the entire family (and likely the entire neighborhood) by frequently demonstrating her karate moves.

Jessica is somewhat of a walking "snotty little sister" stereotype. She frequently pokes her nose into Spencer's business and takes great pleasure in ratting him out to their parents. However, she doesn't really seem to care when she sees Spencer talking to himself or doing his "special effects", likely because that isn't anything she can tattle on him for.

She isn't afraid to use karate as an answer to everything. If someone decides to wrong her or offend her, they can be assured of a swift kick to the stomach. Unfortunately, this also makes her do things like getting kicked out of a martial arts competition for fighting. With the judges.

Many people are afraid of her due to her penchant for karate and tattling. However, when she isn't being snotty, she is very much harmless.

Jessica has been shown to be a big fan of all things karate. Spencer easily bribed her in Billy Joe Cobra Museum with outtakes from karate masters' movies. She was seen practicing with a punching bag alongside her mother (who regrettably got caught in the middle of Jessica's attack).

She also appears to be interested in boys (as many prepubescent girls are), evidenced by her temporary yet utterly tragic crush on Kleet.

Jessica being slapped by a fish.

For once, this girl gets an undeserved taste of her own medicine.

You don't wanna mess with the Jess!

Isn't this an abuse of Kung-Fu? 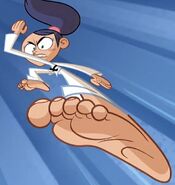