Scaring Mallory is the Dude, That's My Ghost! series premiere. It aired for the first time on February 2, 2013, along with Billy Joe Cobra Museum.

When Billy's ghost pride is challenged, he decides to scare Mallory, an easy target. Unfortunately, he scares her so badly, it makes her want to leave Beverly Heights. Spencer must prove that she won't be visited by ghosts any longer in order to convince her to stay.

At the Cobra Mansion, Spencer Wright, along with Rajeev and Billy Joe Cobra, is editing together clips to make one of his many horror films. He notices that Rajeev's scream in the movie is unrealistic. In order to amend that, Spencer decides to use Billy to coax more believable screams from unsuspecting Beverly Heights residents. Billy is eager to take on the challenge. However, when he tries to scare people, all of them are only made happier by his efforts, and nobody screams.

Dejected, the trio go back to the WiFri. Billy insists that he can scare people, but Spencer has already given up the cause. After being laughed at, Billy sulks away in a miniature doll house, only to overhear Mallory at the food counter. Mind burning with schemes, he races over and squirts ketchup and mustard all over her, eliciting a beautiful scream (recorded by Rajeev) and Spencer's dismay in the process. Billy gloats about his success to himself while Spencer runs off to try and console the distraught Mallory. Rajeev tries to warn Billy that he made a mistake, but Billy doesn't finish listening to Rajeev and ends up thinking that Spencer wanted a better scream.

Meanwhile, Spencer tries to explain the whole incident to Mallory, writing it off as "special effects". She is temporarily relieved, but Billy ruins it by making a lawnmower float in mid-air, turn on (seemingly by itself), and chase Mallory back into the safety of her house. Upset at Billy's haunting, Spencer explains his situation to Billy, causing Billy to finally understand. Spencer tries to talk to Mallory again, but Billy's playing with garden shears scares her yet again. Spencer is not amused.

The next day, at school, Spencer shows up with Billy following him, only for Spencer to get punched by Kleet and electrically shocked by iStevie: both as punishments for scaring Mallory. Principal Ponzi is shown to be distressed due to the loss of Mallory as his "number 1 recruiter". After an encounter with an angry news reporter, he learns that Mallory has decided to leave Beverly Heights for good. Panicked by this information, Spencer decides to tell Mallory the truth about what is happening to her: Billy and all.

When Spencer explains the whole situation to Mallory a short time later, Mallory is flattered that he would "make up a silly story to make [her] believe [she's] not being haunted". Spencer puts one of Billy's pirate hats on Mallory's head to make her able to see Billy, but Billy is not in her line of sight, as he is off getting ice cream. She takes off the hat and Billy returns, only for Spencer to put the hat back on and Billy to run off to get more. This goes on for a short while, with Billy's constantly asking about ice cream flavors, the ordeal accelerating until Mallory decides to stop wasting time with the hat and get packing so she can run away from the ghost. Spencer gets an idea and tells Mallory that while she can't run away from Billy, he will personally "ghostbust" him for her.

Some time at night, Spencer, Billy, and Rajeev are revealed to have come up with a plan. Billy will let himself get "caught" and shooed away from Beverly Heights. However, Billy states he wants some changes to be made. Irked, Spencer lets him go through with them, so long as the end result is the same.

Mallory enters the WiFri only to see Spencer and Rajeev in full Ghostbuster-style getup. Spencer proclaims that he is very knowledgable on ghosts and, at Mallory's prompting, insists that the WiFri is where the ghost will be lurking. He proves himself "correct" when Billy turns up under a sheet, making his presence known. Rajeev whips out a frozen yogurt dispenser, intended to act as a "ghost eliminator". However, Billy doesn't let himself get caught as expected, instead deciding to avoid Spencer's yogurt blasting and snatch up Rajeev. Spencer realizes what Billy is doing and works even harder to catch Billy, shortly before Billy gently places the startled Rajeev on a couch and evades capture some more.

After much yogurt blasting, sub-sheet shapeshifting shenanigans, and "hot ghost potatoes", Billy is finally caught, and Spencer makes a big show of sending him away. Billy leaves, shouting a typical rock star's farewell into the WiFri stage mic and giving Spencer a thumbs-up just before he vanishes out of sight. Spencer assures Mallory that the ghost will never return, and Rajeev decides to get cocky and announce that no ghost will want a piece of him. As payback, Billy pulls Rajeev's pants down, exposing his embarrasing fishnets to Spencer and Mallory. In the end, Mallory is somewhat confused, but relieved that there's no ghost after her anymore.

At school, Spencer passes by the same news reporter from earlier, who announces that Mallory won't be moving after all. Spencer overhears Kleet talking on his cellphone about how "lame" Spencer's "special effects" were and makes fun of Mallory's belief that she was haunted. Agitated, Billy grabs a water hose and turns it on Kleet, happening to derive a very girly screech from him that Rajeev captures on mic. The episode ends with Billy gloating while Spencer and Rajeev idly talk about how well Kleet's scream works for Spencer's film. 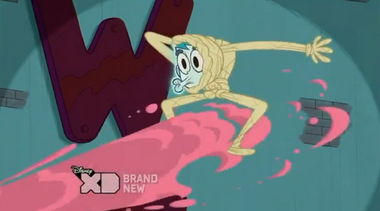